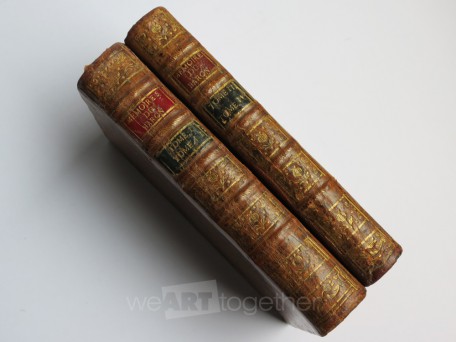 This is the second edition (the original was published at Amsterdam one year earlier) of this famous excellent book. It was published at Maestricht: by J.E. Dufour & Ph. Roux, 1785. Same year as the 4to Second edition and a Paris 12mo edition. 2 vols., 12mo. 4 parts. Marbled calf, some rubbings and marks of use but good condition.

Brunet V, 901, described it : "De Tott had a deep knowledge of Turkey. He was a Hungarian in the French service to the Embassy in Constantinople from 1755 to 1763. In 1767 he was named Consul in the Crimea. In about 1769 he returned to Constantinople, apparently seconded to the Sultan with orders to reorganize the Army and fortify the Black Sea coasts. In 1776 he was apponted inspector general of the General of the French Consulate in the Levant. He immediately went on a tour of inspection, accompanied by Sonnini which lasted until 1778."
An important book about this geopolitic subject, here in a nice quite rare edition.
Legal notices - General terms and conditions of sale - Work together - Partners - V.I.Press - Contact the company We Art Together - We Com' Together, a departement and communication agency of We Art Together - RGPD
© 2022 WE ART TOGETHER - Tous droits réservés